By gastric bypass or bypass are described various types of gastrointestinal bypasses, such as short stomach gastric bypass, long stomach gastric bypass, and cholecogranial bypass. This mixed type of surgical technique is designed to reduce intake of food when other methods have failed. It is suitable for very obese patients and has a success rate of over 86%. In the gastric bypass of a short or long propeller, the smaller, upper part of the stomach is sutured or divided, and is isolated from the rest. The remainder of the stomach and the initial part of the small intestine are bypassed resulting in a reduction in intake food and its partial absorption.

In the cholecognitive bypass, most of the small intestine is bypassed and the last 50-70 cm of the small intestine are operated. This reduces the intake of calories and reduces weight. The gastric bypass improves the patient’s quality of life, not only because it changes its appearance, but because it reduces a number of health problems from which obese patients suffer. Negatives include the possibility of escape, which is treated with parenteral nutrition, and rarely needs re-treatment. Also, due to a change in the physiology of the human body, patients undergoing gastric bypass need supplements of calcium, iron and vitamins for the rest of their lives.

With regard to the cholecognitive bypass, it is important to mention that it is an aggressive technique performed in one phase and due to serious complications including anastomosis ulcer, dumping syndrome (discomfort, nausea, sweating, weakness and fainting due to rapid passage of food from the stomach to the small intestine) has been replaced with the cholecogranial deflection with duodenal blockade. 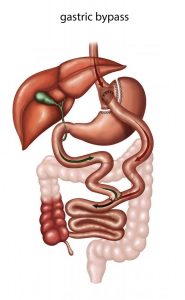